Add all your photos to PDF documents for saving storage space and for creating an album. Move your cursor on the “Upload” and click it for uploading, then transform it by tapping on the “Convert to PDF” button.

JPG TO PDF CONVERTER – FOR SAFEKEEPING OF FILES

JPG (Joint Photographic Experts Group) is named after who created the format. It is generally utilized in capturing and storing photos, in two different versions. One is known as EXIF/JPEG format, which is popularly used in photography today but still the usage of the RAW version is more significant. The other is JFIF/JPEG, the most commonly used version in storing and sharing photos over the internet. JPG to PDF converter online is a tool that enables you to transfer the pictures of your choice in a PDF document. As PDF is a doctype, it allows you to store all sorts of formats, including audio and video.

In case you require to compress a JPG file, try to avoid it because once compressed the original quality of the image is lost forever because of its lossy nature. Whereas, if you add the image to a PDF format, the quality of the photo in the document will not be affected. PDF is a document type and a lossless format that doesn’t let the compression to affect the quality of its contents. PDF (Portable Document Type) was basically created to transfer documents from one place to another. People used to send files individually after compressing them, and it not only disturbed the quality of the pictures, but sometimes it turned the photos so blurry that it go difficult to identify the items in it.

PDF, on the other hand, changed, or should we say evolved the world as most of the secret documents are delivered in this format due to the advanced encryption standards. Our image to PDF converter lets you transfer any of your data stored in photos to a portable style document for safekeeping. There are several formats utilized for moving pictures in bulk, but the PDF holds free standards and doesn’t require any special software like it used to. Today, every OS (Operating System) comes with a built-in PDF viewer, so you don’t need to install any third-party apps to view its contents.

JPG has been around for approximately thirty years now, and today, it is being utilized in capturing high-quality photos from digital and smartphones cameras. As JPG doesn’t achieve the full quality of the picture and is restricted to 256 brightness level, professional photographers prefer RAW format because it allows them to go beyond those limits. Also, these RAW files have a large file size which people doesn’t prefer because of the limited storage everyone has, additionally this format requires special software to open the image file. JPG, however, can be opened in any multimedia device and comes with the advantages given below:

But there are several problems with this format as well, for example, if you compress the file too much, you will see blocks which are pixels, thus, destroying the whole picture. It doesn’t allow an image to have a transparent background, plus every time you resave an image, it will degrade the quality even more. This is where the PDF format kicks in, and you can convert JPG to PDF to avail these benefits:

HOW TO CONVERT MULTIPLE JPG TO PDF WITH OUR TOOL

It is an entirely free JPG to PDF converter tool and doesn’t require you to enter any of your credentials. Moreover, it is a format that has a small size, and people can easily manage their storage size limit. You can save multiple files in one PDF document, but remember the more data you add, the higher will be the size of the document. It is a format that is not likely to go away any time soon, so even if you store images for a long time, they will remain safe and sound.

You can transfer files from JPG to PDF using the set of instructions given below:

You can transfer files from JPG to PDF using the set of instructions given below:

1. The JPG to PDF converter tool is easy to use when you have opened the page and found a large “Upload” button as shown below, simply tap on it and upload the file. 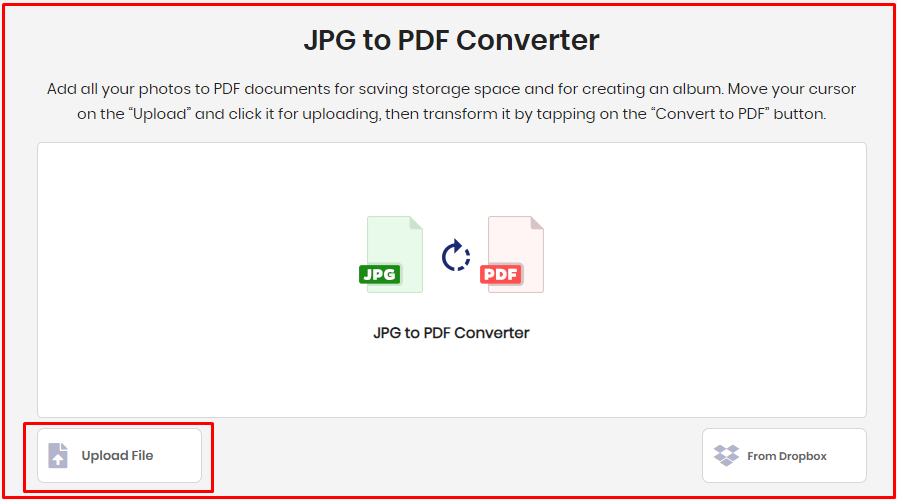 2. When you are done uploading, hit the button that says “Convert to PDF” and you will be able to download a PDF document in a couple of seconds. 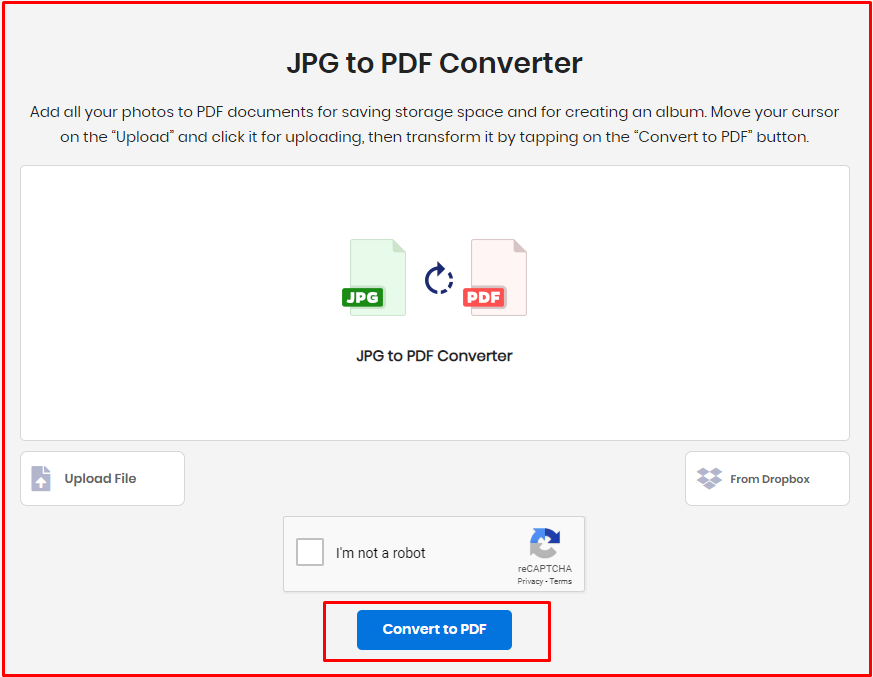